Windowpane is recognized as one of Jeong Ji-yongs great works that showcase his unique style of detached observation relying on attentive descriptions of low level details. The short poem about a sad and lonely man, perhaps Jeong himself, looking through a window at night breathing on the windowpane and observing the fogging and clearing patterns on it. He is probably doing this because he can't help it, because it is the only way he can assuage his sadness after he has lost his son, as the last lines reveal. The foggy breath on the windowpane is described like it's a living being, flapping wings and submissively reacting to what he does making the night outside recede or surge back; the tear in his eyes creates a watery star that flickers and gets lodged in the picture. All this is depicted in an almost analytical style that appears in many of his other works as well.

This style of preferring objective description and imagery was a literary trend that Jeong had adopted and advanced in the 1930s together with a group of avant-garde poets known as Imagists. They put the intellect before emotion, and analytical imagery before traditional descriptions, adopting the new literary sub-genre first popularized by Western poets. In this work, the poet at least closes with very emotional lines at the end about the death of his son, unlike in some other such works where no trace of emotional attachment can be found. 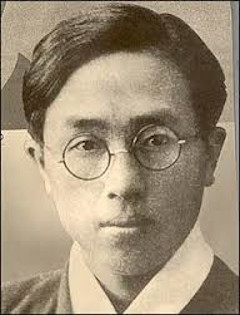